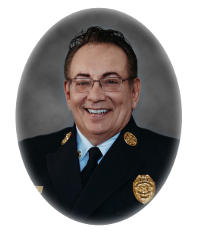 Fire Chief Michael Callahan is the Chief of the Kansas City Kansas Fire Department. He is in his 40th year in the Fire Service, has served in every operational rank, and frontline, managerial, and administrative disciplines in his career. Chief Callahan is internationally credentialed as a Designated Chief Fire Officer by the Center for Public Safety Excellence. Chief Callahan has a dual Bachelor of Arts degree in Law Enforcement & Justice Administration and Spanish Languages from Western Illinois University in Macomb, Illinois and a Master of Science degree in Homeland Security from Tiffin University in Tiffin, Ohio. Chief Callahan came to the Kansas City, Kansas Fire Department after serving with the Chicago Fire Department. Chief Callahan is extremely fortunate to be supported by an outstanding Command Staff and a dedicated, courageous, and determined group of Company Officers, Drivers, and Firefighters who are the backbone of the Department.

Get the latest information on UG response to COVID-19